John Hallett’s involvement with the AUE began at 1pm on 9th May 1970, when 10 engineers from various universities met at Aston University, at the behest of Harland Roberts, to discuss the possibility of setting up an association of engineers within UK universities.  John joined the Executive Committee a few years later and in 1985 became Chairman.  In this year, he also hosted the Association’s Annual Conference in Manchester.  Following his Chairmanship, John continued on the Executive Committee, taking over as Secretary in 1990 until his retirement in 1996.  John then took on the role of Retired Members' Representative, organising the retired members conference programme and a total of eight visits to universities in Germany.

The John Hallett Award was created in 2013 to mark John’s retirement from the AUE Executive, having been a member of the AUE for 43 years.  The award will be presented annually to an individual who has provided an outstanding contribution to the AUE during the previous twelve months.  Sadly, John passed away on 29th June 2019, following a bravely fought battle against cancer - Simon Corless paid tribute to John at the Gala Dinner held at Lancaster University (2019).

The 2022 John Hallett Award was presented to Sam Heppell of Newcastle University at the AUE Gala Dinner held at University of Stirling on 9th September 2022. This is in recognition of Sam's enthusiasm and dedication in leading the AUE Website Refresh to ensure it is safe & secure, compliant, and up to date with modern technologies and devices. In addition to this, Sam has also delivered all his duties as North East Vice Regional Chair, attending all relevant AUE Executive and Regional Meetings over the year. He is now North East Regional Chair and is due to take over as Learning & Development Coordinator in 2023.

The 2019 John Hallett Award was presented to Simon Corless at the Gala Dinner held at Lancaster University on 5th September 2019 for his considerable services to the AUE, not only at North West Regional Chair since 2015 but now for hosting the annual conference for a second time. 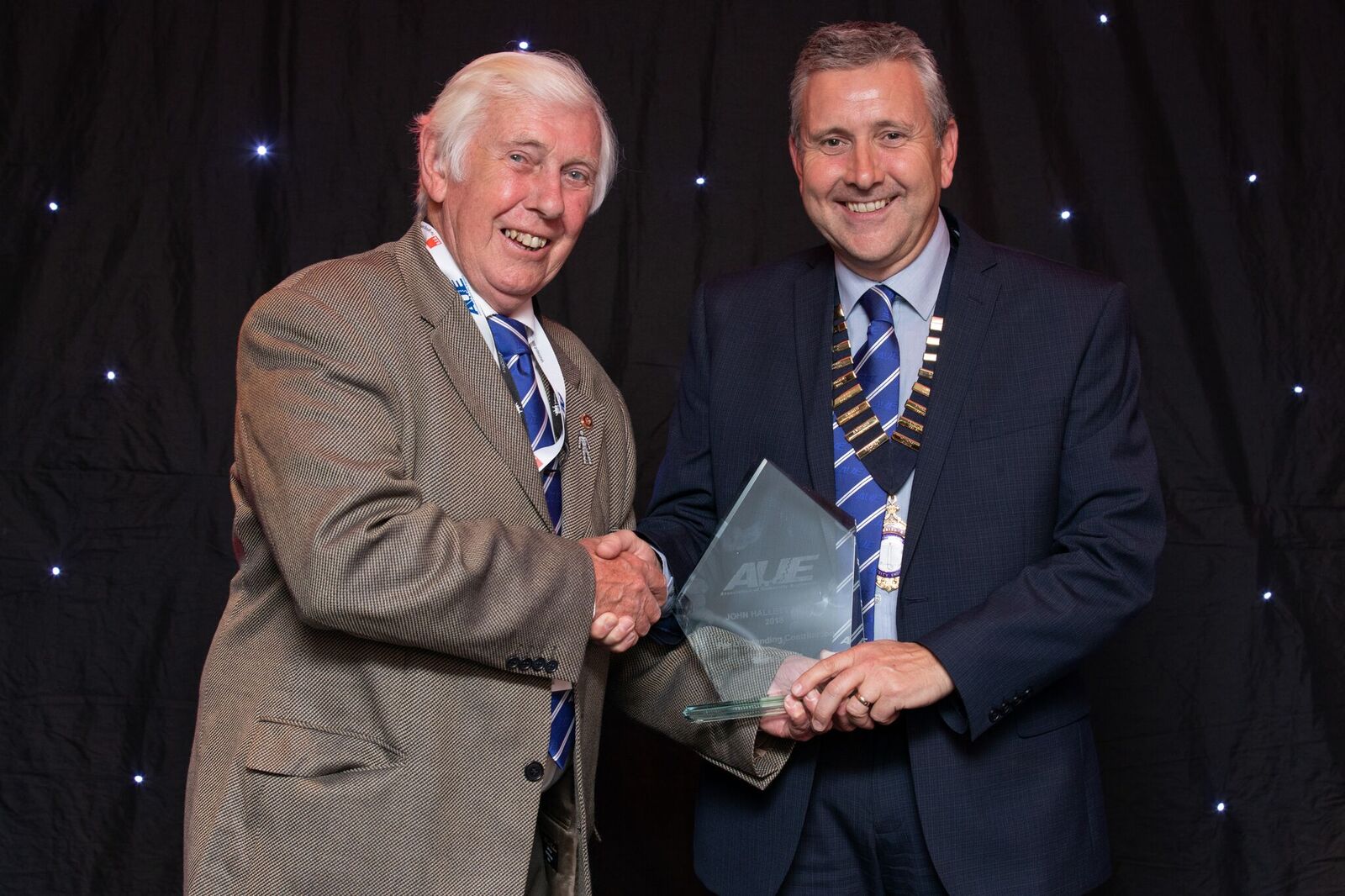 The 2018 award was presented to Steve Dunne at the Gala Dinner held at St Mary’s Football Stadium in Southampton on 6th September 2018.  The award was presented to show our appreciation of Steve's unrelenting support of the AUE - first as South West Regional Chair, then Vice Chair, a two-year stint as National Chair and in 2018 concurrently as Conference Host (in addition to the demands of his 'day job')

The 2017 award was presented to Heather Loosemore at the Gala Dinner held at St Mary’s Church, Nottingham on 7th September 2017.  The award was presented in recognition of her significant services to the AUE, organising and promoting AUE Academy training courses.

The 2016 award was presented to Keith Sims at the Gala Dinner held at the Twickenham Stadium "Home of England Rugby" on 8th September 2016.  The award was presented in recognition of his considerable services to the AUE, serving not once but twice as AUE Chairperson, Conference Host for 2015 concurrently with Wales Regional Chair.

The 2015 award was presented to Paul Richards at the Annual Dinner held at National Museum, Wales on 3rd September 2015.  The award was presented in recognition of Paul's outstanding contributions as Treasurer, Immediate Past Chair and his support to the Conference 2015 team over the past year.

The 2014 award was presented to David Barratt at the Annual Dinner held at the University of Bradford on 5 September 2014. David has been in post as chair of the Scottish Region of the AUE since 2008, he has successfully galvanised the Scottish Region during his tenure as Chairman to be one of the most active regions within the AUE and his personal contribution on the executive committee has resulted in many positive initiatives including collaborations with BSRIA and the establishment of the free member services of the National Equipment Defects Reporting Scheme which gives its subscribers access to an international database of some 47,000 reports from service providers and industrial users on electrical equipment defects from manufacturers worldwide.

David plans to retire his post at conference and this award is a fitting way to say a huge thank you for all his hard work and commitment to our Association.

The 2013 award went to Tony Hammond of Brighton University, for his work in sourcing information for the Info Centre on the AUE website. Tony received his award from John at the Annual Dinner at the National Maritime Museum on 5 September 2013.